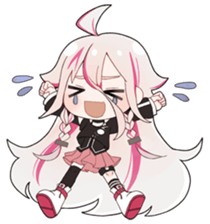 some of my absolute favourite vocaloid songs! i won't put more than 1 song per producer here but if a song is here i definitely love the producers other works + i recommend you check them out as well!! This page is going to be a complete mess i just want to gush about my favourite songs in the most incomprehensible way possible, sorry if it's a bit cringe. thank you <3

yes i am a little bit silly putting a song from 2010 at the top of my "favourite songs" page. especially when i didnt even find this song until late 2020. i cant use nostalgia as an excuse or something. I just REALLY like this 2010 vocaloid song that is like, incredibly 2010. that doesn't mean its bad or anything, you can just kind of tell from the video + tuning + general style of song that this is ridiculously old. and i guess thats part of what i like about it. im a big fan of really early vocaloid even if i wasn't into vocaloid itself until around 2014. i just think its soo neat. also a cool thing i found while doing some research is that this song got a novel adaptation ? in 2015??? very interesting. Anyways i just think this song is really lovely. the lyrics make me feel things and the music video is cute and it's just a great song. ive listened to it 300+ times.

I, morally, can't put more than one sasakure.UK song here. so here's a list of some of my other favourites

this song makes me cry i just think it's absolutely perfect. pinocchioPs discography is so huge and so many of his songs have lyrics that make me feel like i'm getting run over by a truck but oh my god this one is easily the best for me. just one of the best songs ever in general. it's so so good i don't even know what else to say about it just listen to it. thank you. i'm listening to it while i write this and i'm like tearing up a little bit. christ. and because pinocchioP is my favourite producer i'm going to make a list of all of my other favourite songs of his too. like i did for sasakure.UK, because i dont want to make this page unbelievably long by embedding 50 youtube videos. (it ended up being unbelievably long anyways).

REALLY cool song by cosmo@bousouP. the contrast between this one and the original "disappearance of hatsune miku" is something im kind of obsessed with. just like the general shift from treating hatsune miku as a character to treating her as another consumerism fad or whatever, or something. IDK if i worded that right but this song really does show the difference between the way vocaloid was treated in the early days vs. how it started being treated in like, the late 2010s. the 2016-2017 sand planet "vocaloid is dying era". man remember when people thought vocaloid was dying? thats still so funny to me

anyways this has been one of my favourites since like 2016.. it just kind of goes.. and the lyrics are super cool.i guess. yeah.. i like this one alot.  one thing that made me lose my SHIT when i was 14 is how you can like, vaguely hear the chorus of the original Disappearance of hatsune miku right before the final chorus of this song. Just a cool little thing. this song rocks

ive been a huge fan of inabakumoris works since pascal beats in 2016.... his style is really cool and interesting and i think it's really perfect for kaai yuki. she doesn't get used very often and i like her voice a lot. i was a bit sad when he changed the style of his videos after getting a new artist for his videos (even though the newer art is also super cool! just missed the video editing and general style of video he had before. i thought it was cool). so lagtrain was SOOO cool. not only is it a banger but it combined both the newer art of his more recent videos with the older style of videos with looping animations and stuff.. Just thought it was super cool. definitely my favourite of his songs.

to be honest i kind of had like, no idea what kemu song to put here. i knew i couldnt make a "favourite vocaloid songs" list without including a kemu song, because he was my absolute favourite vocaloid producer when i was in middle school. my first real vocaloid song that i found that wasn't an english cover was six trillion years and a night this guy has like followed me around my entire vocaloid fan lifespan. but it's so hard for me to actually choose a favourite kemu song because i think every single one of his songs has shifted my brain around in some way. irreversible damage done to my brain via 2012 vocaloid songs. and also i think if i had to choose one favourite it would have to be an album exclusive song (one of the two vocaloid albums i own is pandora voxx reboot ive had it for years and i still listen to it all the time. best album ever) but i decided reincarnation is most special. just because it has a full video that includes the original characters instead of the vocaloids. i think i could write an essay on kemus vocaloid series. don't let me do that.

other songs of his that i really like are invisible and dear doppelganger and life cheating game, and also because i mentioned the album exclusive songs earlier my favourites from those are kimi ni motetai and mop heroism. VERY fun. also i really love the album instrumentals no one ever talks about them. daze and platform are bangers.

i've got no sense for living - aoya ft. teto

i love songs that use teto so much, she's genuinely one of my favourite voicebanks despite utau being... utau. i don't know. there's just something about her voice, i like it a lot. this song is just kind of special also. has a lot of noises.

i dont really have an entire paragraph to write for this one like the others i just really, really like it a lot. the instrumentals are a bit chaotic/jarring at times, but i really love it. the chorus is fun, i like the lyrics, Idk... its a special song.
I can't think of any other songs that are like, "special", or important enough to be on this page... I have loads of favourites but my standards for what needs to go on this page are strangely high... so that's all for now! thanks for reading